At a glittering ceremony at the East Midlands Conference Centre in Nottingham, the boys’ achievements in becoming the first side to win the National School Vase twice, after a 43-7 victory over the Royal Latin School at Twickenham in March, were recognised with the prestigious county Under-19/School Team of the Year award. 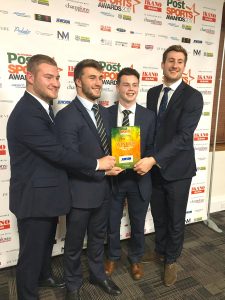 Four of the Vase-winning XV were on hand to collect the award – Jack Dickinson, who skippered the team at Twickenham and scored two tries in the final, team captain Andy Brown, Twickenham man-of-the-match and scorer of the fourth try, Charlie Livesey, and all-action loosehead prop, Fred Hendry-Briars.

Trent College, which celebrates its 150th anniversary this year, were one of three finalists in their category, alongside Becket rowing club junior girls squad and Nottingham Forest ladies under 18s.

Jack commented: “The award is testament to the longevity of rugby at Trent College, which goes from strength to strength. It is great to be part of the legacy.”

Also representing Trent College at the ceremony, run in association with Sport Nottinghamshire, were Head, Mr Bill Penty, one of the team coaches and former Scotland international, Chris Gray, and Deputy Head (Co-curricular), Miss Lucy Matthews. The current U18s squad, including Vase-winning Head Coach, Steve McGinnis, and a number of the Twickenham team, are on tour in Canada.

Mr Penty added: “This is a wonderful accolade for a fantastic group of players and for the school as a whole. It is a tribute to them and to the strength and breadth of all that the school has to offer.”

While last year’s First XV celebrate their latest honour, this year’s team continue their quest to defend the title when they face Welbeck Defence Sixth Form College, Loughborough, in the Vase fourth round in the week commencing 6 November. The two schools previously met in round two of last year’s Vase, with Trent College running out 38-10 winners.

Helping Children Succeed in their 11+ Exams –...

Barnard Castle School Students perform And Then There...

How to Teach Positive Body Image

Solihull School to host a reunion day to...