Three boys from the Royal Hospital School will be tackling the gruelling Paras’ 10 on Sunday 18 May in Colchester. Sean Cuddihy, Cameron Fairrie and James Parker have been training hard in any spare time they have found outside of school for, what has been called, ‘the ultimate 10 mile endurance race’!
The Paras’ 10 is a 10 mile cross-country run carrying a 35lb (16kg) Bergen (this excludes water and food) while wearing long trousers and military style boots. The race was founded in 1982 by WO1 JJ Wilson and was hosted by The Parachute Regiment in Aldershot from ’82 – ’93. Alongside the Paras’ 10 is a straightforward running race over the same course but without the extra weight or clothing. 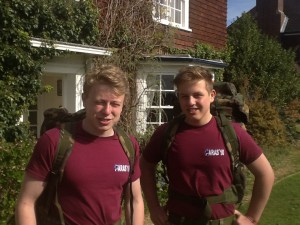 The boys have trained together to be ready in time for Sunday, running both with and without packs mainly around neighbouring Alton Water reservoir. They also ran the School’s 10.5 mile mini-marathon held last weekend with James and Cameron, running with the full pack and kit, finishing in just 18 minutes past the cut off time for P company!
The boys are raising money for the Royal Centre for Defence Medicine Patient Welfare Fund. If you wish to support them in this both physically and mentally challenging endeavour for a worthy cause, please visit http://www.justgiving.com/James-Parker16
0 comment
0
Facebook Twitter Google + Pinterest

St.Mary’s School selected to be a Eco-Schools Ambassador

Sport Scholarships at Rydal Penrhos Up for Grabs

GDPR – Are you Ready?

Next Generation Of School Transportation