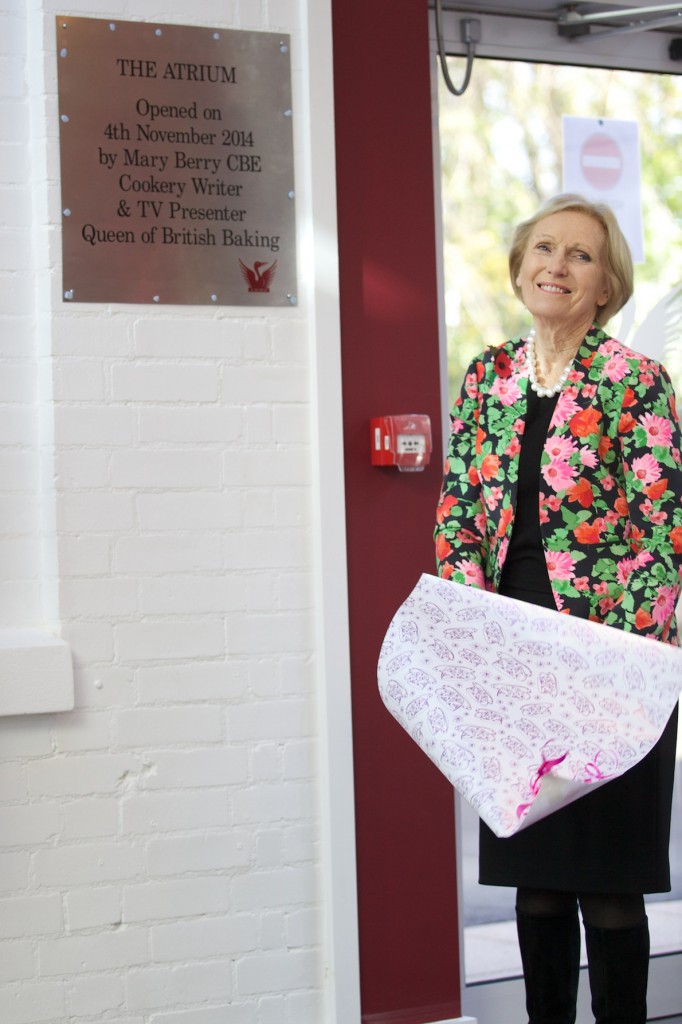 Yesterday Mary Berry, food writer and television presenter, officially opened Stamford High School’s newly refurbished Home Economics rooms. Mary spent the morning at the school meeting pupils, observing a cookery lesson, signing books and being interviewed by members of the student-led school magazine team. She also led the school assembly, where she spoke about the importance of learning to cook.
The morning culminated in Mary unveiling a plaque which officially declared the Home Economics room open. The new Home Economics rooms are state-of-the-art, with sweeping Corian worktops throughout, and built-in sinks and cookers. There are two large classrooms with space for 16 pupils in each, and both have fully equipped kitchens with designated cooking and theory areas. A new feature is that all pupils work facing towards one another, so collaborative learning can take place. Each classroom has a demonstration table with a video camera which can be projected onto the screen behind.
Principal of the Stamford Endowed Schools, Stephen Roberts, said “The Schools were proud to welcome Mary, who, through programmes such as ‘The Great British Bake-Off’, has been instrumental in shaping the nation’s attitude to food and cooking. It was wonderful to see the enthusiasm that the pupils showed Mary, and she was very generous in taking the time to speak to so many of them. Her talk in the assembly underlined the importance of being able to cook and inspired the pupils with her entrepreneurial spirit.”
Tessa Bennie, Head of Home Economics at the school, said “It was an honour to meet such a stalwart of baking and cooking, and to have Mary officially open our new Home Economics rooms meant a great deal to our pupils. Cooking is an essential skill and everyone should know how to prepare healthy, tasty meals. Home Economics is a popular option at our School and will set the pupils in good stead throughout their time at university and in life beyond.”
A gallery of photos from the visit can be seen on the Schools’ website at www.ses.lincs.sch.uk.

How Parents can Enhance Remote Learning