The incredible achievement of seven 13-year-old prep school pupils from Taunton School has been recognised with a Pride of Somerset Youth Award after they swam the English Channel for charity. 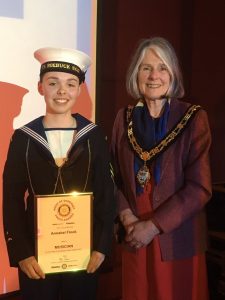 Furthermore, 17-year-old sixth former Annabel Flook also received an award for becoming the Lord Lieutenant Cadet, in recognition of the high level of commitment and leadership.

Emma Hounslow, Emily Lawton, Skyla Coate, Ollie Halliday, Imogen Childs, Jonny Cole and Annabelle Lewes took up the challenge of a lifetime in September last year, by swimming the relay of 22 miles across the Channel in just fifteen hours. They went toe-to-toe with the elite of the British Military and came second after being pipped by the Royal Marines, who were just 3 minutes ahead. The pupils beat the staff team by a substantial 50 minutes.

The seven pupils raised a considerable £13,700 for the Royal Marine Charity. They showed tenacious commitment to the challenge, undertaking a rigorous training programme over the twelve months leading up to the swim. Every week they went open water swimming at Lyme Regis, Brixham and Clevedon and training with Taunton Deane Swimming Club and at the Wiveliscombe Lido.

Furthermore, in October 2015, they swam 2.5 miles across The Solent from Portsmouth to the Isle of Wight, where they set some of the fastest times ever recorded and raised £16,000 for the spinal charity Aspire.

School Minibuses in Stock and Ready for Immediate...

Happiness is a Serious Business at Oakham