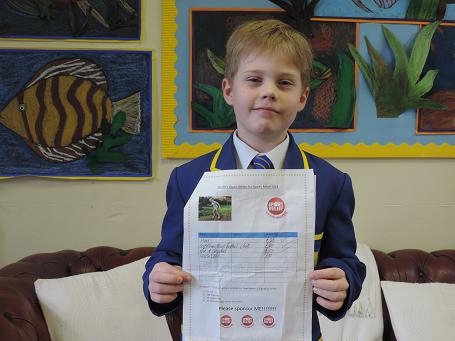 Elliott Wade, a Year 5 pupil from St. Margaret’s Prep School in Gosfield, came up with the Quadathlon following a conversation with his dad about charities and how he could help other people. Elliott chose to raise money for Sport Relief, and began asking friends and family if they would sponsor him.
With his dad by his side, Elliott rode, ran, scooted and dribbled his way to the fantastic amount of money one day during the February half term. The duo’s journey took them through the villages of Alphamstone, Pebmarsh, Bulmer, Sudbury, and Lamarsh, before ending at Bures football pitch.
Elliott said although it was tiring, he was happy to be able to help: “St. Margaret’s Prep is helping Sport Relief this year so I chose the same charity to help. I’ve been training since Christmas, and I was really looking forward to completing Quadathlon.
“My dad and I were both very tired at the end of the day, and my legs are still aching! But I’m so pleased to have raised over £970, and thank you to everyone who sponsored me.”
Mrs Powling, Principal at St. Margaret’s, added: “We are all very proud of Elliott – he has really inspired us to raise lots more money for Sport Relief on our Charity Day later this term.
“The whole school will be involved in sporting events, organised by our Sports Department, and it will be a wonderful day!”