Brentwood School pupils are being turned into space biologists thanks to an ‘out of this world’ educational project which has seen them planting rocket seeds. 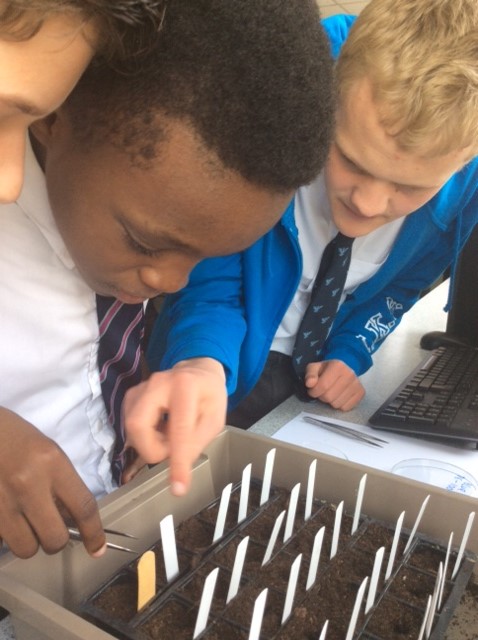 With the help of sixth form A-level biology students, first year pupils planted 100 seeds which had been in space and exposed to zero gravity, and another 100 identical seeds which had remained on Earth.

One pupil said: “I can’t believe I am excited about this. If my mum asked me to plant seeds with her at home, I would say no. I am really interested to see what is going to happen”.

The Rocket Science project, a co-venture between the RHS Campaign for School Gardening and the UK Space Agency, aims to show children how science in space contributes to our knowledge of life on Earth.

Two kilograms of ‘rocket seeds’ spent several months, in zero gravity, on the International Space Station with British astronaut Tim Peake. The seeds were then sent back to Earth, packaged up and sent to schools, including Brentwood, who are taking part in the nationwide programme.

The idea is to germinate and grow the seeds and compare them to the germination and growth of similar seeds that have not experienced zero gravity.

Biology teacher Mrs Pamela Ebden said: “The results will form part of a national online database, and will hopefully inspire our pupils in science.”

As part of the lesson, Mrs Ebden showed the excited pupils recent NASA video clips and asked pupils about the ISS and Tim Peake. They also enjoyed a question and answer session and discussed life on the space station.

Organisers of the project explained: “Using these resources, we want pupils of all ages across the UK to embark on a voyage of discovery to see what growing plants in space can teach us about life on Earth and whether we can sustain human life in space through the production of our own food.”

Over the course of the trial, the plants will receive equal water, light and be grown under the same conditions. The young biologists will then record:
• The day the first seed germinates
• The number of seeds that have germinated after day 10
• How many days it takes for the first seedling in each tray to grow two true leaves
• How many seeds are alive on day 17 and turn this into a percentage.
• The height of the tallest plant from each tray on day 21
• On day 28, randomly select five seedlings from each tray and count the number of leaves on each. Then calculate the average number of leaves per tray and write this on a measurement chart
• Count the number of plants that are alive on day 35.

The seeds are expected to take between three and 10 days to germinate. All the results will be submitted to the national Rocket Science database website and have to be entered by 17th June.

The results of this exciting project will be presented by astronaut Tim Peake on a specially recorded video released to each school taking part before the end of the summer term.

Election Commentary: The English School System is in...