Whilst many students were enjoying the peace and quiet of the half term break, a group of students from New Hall School in Chelmsford got the experience of a life time when, as part of the New Hall Choir, they performed at Mass in St Peter’s Basicilla in the Vatican.
The 60 strong New Hall Choir were invited to perform as part of a short tour of Rome which also saw them sing in two of the other Roman Basilicas – San Giovanni in Laterano and the Basilica di Santa Maria Maggiore. They also sang a concert in the Pantheon – a Roman temple that was later consecrated as a church.
The music performed by the choir included Jubilate Deo by Britten, Mass in G by Schubert and Locus Iste by Bruckner.
Andrew Fardell, Director of Music at New Hall, said: “The experience of singing in the Vatican is one which will stay with our students forever. We are all truly privileged to be able to perform such wonderful music in such majestic surroundings. I was incredibly proud of our choir who sang magnificently throughout the tour.” 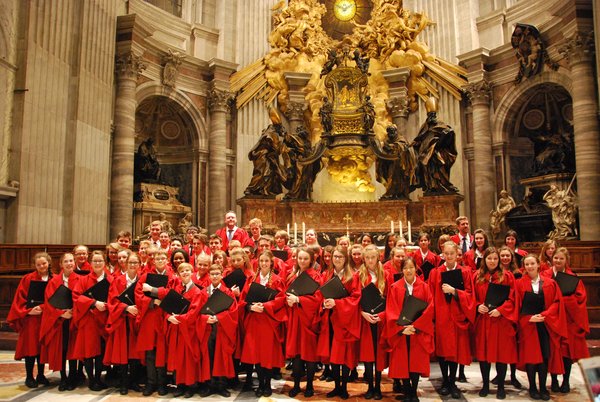 Student Molly Conrad (Year 12) said: “It was a privilege to represent New Hall by singing in all of the major basilicas in Rome. The response from the Italian congregations during the liturgies and from the tourists during our ‘flash mob’ performances across the whole of Rome was uplifting. It was a once in a life time opportunity and something I will always remember.”

Adventures in the Pyrenees