Well-known TV broadcaster, explorer and marine biologist Monty Halls recently delivered a lecture to pupils at Dauntsey’s School.
The talk was part of the School’s programme of Mercers’ Lectures which are named in recognition of the links between Dauntsey’s and the Mercers’ Company, which go back to Mercer founder Alderman William Dauntsey, Master of the Worshipful Company of Mercers, who founded the School in West Lavington in 1542.
So far this season, large audiences have been entertained and inspired by politicians, peers, campaigners, city and retail executives, sportsmen and adventurers. Lecturers have included Robert Hiscox, Christine Hamilton, Baroness D’Souza, Derek Redmond, Robert Swannell, Monty Halls, Dame Fiona Reynolds, and Douglas Carswell. 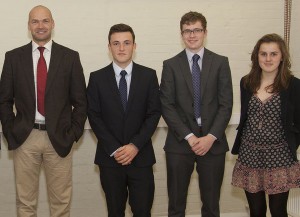 Mark Lascelles, Head Master, Dauntsey’s School said: “Dauntsey’s is a busy place and the School is proud of the numerous and wide- ranging extra-curricular activities available to pupils. A particular highlight is the chance to meet and talk to eminent speakers through the School’s Mercers’ Lecture Programme.
“Our pupils are very fortunate to have access to such high quality lecturers, many of whom also join a group of Sixth formers for dinner and a discussion before their lecture.”