Pupils from Kingham Hill School were on song this week as they travelled to Paris to take part in a commemorative concert marking the centenary of the Battle of the Somme.

Over 20 pupils, aged 11 to 18, travelled to the Dernancourt Church to take part in a special concert that honoured the thousands of soldiers who gave their lives in the Battle of the Somme.

The school choir had the privilege of performing a range of songs including a new arrangement written by Head of Music Dan Chambers, he wrote the piece especially for the concert which combines the two national anthems of France and Great Britain into a single piece, which illustrates the partnership that has continued between the two nations from Dernancourt one hundred years ago.

Following the concert to invited dignitaries and war veterans, Gareth Williams, Head of Languages at Kingham Hill, exchanged gifts with the Association Centenaire de la Guerre 14/18 as a mark of respect to the fallen soldiers. The Association gave the school a collection of shell cases and barbed wire pickets dug up from surrounding fields, which will form a permanent exhibition piece in the school’s new library to commemorate the part Kingham Hill alumni played in the First World War. 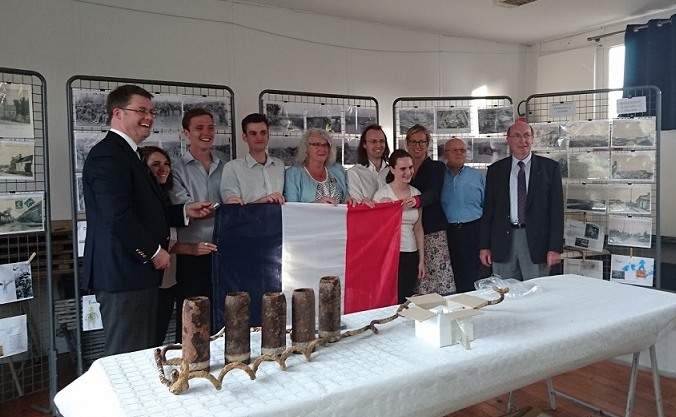 Before this special performance, pupils had the opportunity to visit the grave of Kingham Hill alumni Private Sidney Collier of the 9th Battalion of the Devonshire Regiment from Kingham Hill Latimer House, who was killed on the first day of the Battle of the Somme. Pupil Elodie Phillips laid a posy of poppies picked from the battlefield and Esther Savage laid a poppy cross at Sidney’s grave as everyone stood in silence to pay their respects and remember his sacrifice, and those of the hundreds of thousands killed in the battle.

Gareth Williams also visited the graves of Guardsman Sidney Reading of the Grenadier Guards from Durham House, Private Philip Pitt of the 1st Battalion Canadian Infantry from Clyde House and Private Charles Turner of the Royal Fusiliers from Bradford House who lost their lives during the battle and the First World War.

During the rest of the trip the choir were invited to sing on the Videopolis stage at Disneyland Paris. Everyone was very pleased to have been able to visit the park and to have been selected to perform at the internationally renowned resort.

For their final performance, pupils visited the picturesque Jardin du Luxembourg where they sang for a number of impressed local residents and tourists.

Dan Chambers, reflected on the success of the trip: “It was great to see so many pupils taking the opportunity to learn more about the history of France during our trips to Bastille, Place de la Concord and the Palace of Versailles. Everyone was especially moved to have been asked to perform in memory of those who died serving their country.”

Esther Savage, a year 12 pupil, added: “The activities have been so diverse and yet there’s not been a moment I haven’t loved. Paris has been quite possibly the best trip I’ve been on at Kingham.”

Trent College students have been inspired by a...