In his first visit to the School, Lord Winston spoke to 300 students, staff and guests in the Benenden School Theatre on Wednesday 27 January. Students from the Pestallozi charity and from Homewood School in Tenterden joined their Benenden counterparts for the evening.

Lord Winston’s talk – entitled Modifying Humans: Where Does Genetics Stop? – explored the history of genes and considered the possible implications of scientific advancements. 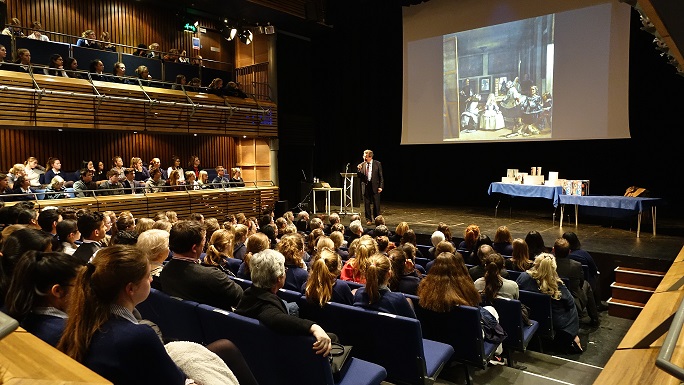 Before his talk, Lord Winston enjoyed a tour of Benenden’s impressive Science Centre and met some of the donors whose generosity helped fund it. He also chatted with Biology students who were running a DNA analysis gel in one of the laboratories and then joined students for dinner before delivering his speech.

Benenden School Headmistress Samantha Price said: “It was an honour to welcome such a distinguished visitor to our School.

“Our fabulous Science Centre looks good and feels good but it essentially exists to stimulate minds: to cry out for exploration and explanation, to question and to strive for answers. Lord Winston’s talk was both fascinating and thought-provoking, and will serve to further enhance the scientific education of girls at Benenden, and of everyone else in the audience.

“The presence of Lord Winston here at Benenden demonstrates the strength of our science offering, and he told me he was delighted with the standard of science facilities and of the knowledge of our science students.

“The girls were proud to be able to share their experiments with Lord Winston and he was wonderful company all evening. The fact that our Theatre was completely full shows what a compelling speaker he is.”

Lord Winston’s research into embryology and genetics is internationally recognised. As a researcher into human reproduction, Lord Winston helped develop techniques for sterilisation reversal. The improvements he has developed in fertility medicine have subsequently been adopted worldwide and he has been most prominent in many areas of research related to various aspects of human reproduction, and founded the first In Vitro Fertilisation (IVF) Programme. His group’s research enabled families with a history of a particular genetic disease to have children free of fatal illnesses.

He is well known today to audiences throughout the world for several BBC television series, which include The Human Body, Secret Life of Twins and Superhuman. He is Professor of Fertility Studies at Imperial College School of Medicine, London University, and is world-renowned as a fertility expert. He also heads the Department of Reproductive Medicine at the Hammersmith Hospital in London. He was created a Life Peer in 1995.

Dauntsey’s Commemorates the Battle of the Somme