Dauntsey’s tall ship, Jolie Brise, is honoured to be carrying a letter of congratulations from Her Royal Highness Queen Elizabeth II to the people of Quebec, Canada. This year, the Canadian Confederation is celebrating its 150th anniversary and the Rendez Vous 2017 Tall Ships Regatta has been organised to mark this important birthday.

Jolie Brise was entrusted with the letter last month by the Captain of the Dutch Tall Ship Wylde Swan. Jolie Brise is now en route to Bermuda where she will pass the letter on to one of the other four ships who will complete the entire Tall Ships Regatta. Each of these vessels will be presented with a ceremonial copy of the letter. 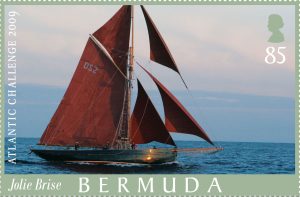 Toby Marris, Dauntsey’s Head of Sailing, said: “We are very honoured to be carrying this important letter from the Queen to the people of Quebec. It’s a particularly fitting responsibility for Jolie Brise, considering she was the last boat to carry the Royal Mail under sail and Bermuda was one of her route destinations – there was even a stamp issued by the Bermuda in 2009 to commemorate her service!”

You can follow Jolie Brise on her journey using this fleet tracker http://yb.tl/rdv2017.

She is currently placed second with only three hours’ difference between her and her closest rival Blue Clipper. The American fleet is now also racing to Bermuda from Charleston, South Carolina. Both fleets will come together for the festivities in Bermuda which start on 1st June.

Our Lady’s Abingdon hosts Save the Children craft...

Increase in Pupils Studying the IB at St...