Croydon MUN – A Model of Organisation and Inspiration

On Saturday 12th December, Croydon High School held their first Model United Nations Conference attended by 180 delegates from 19 schools in the south-east. Although the school has participated in MUNs for many years – and achieved considerable success, winning Best Delegation at the last conference hosted by Reigate Grammar – this was their first foray into running a conference.

Model UN (or MUN) is offered as an extra-curricular activity in many schools and enables students to learn about diplomacy, international relations and the United Nations. MUN involves and teaches valuable researching, public speaking, debating and writing skills, in addition to developing critical thinking, teamwork and leadership abilities.

Regular MUN conferences are held all over the world; participants, known as delegates, are placed in committees and assigned countries that they then represent. They are presented with their assignments in advance, along with a topic or topics that their committee will discuss. Delegates conduct research before conferences and formulate positions that they will then debate with their fellow delegates in the committee, staying true to the actual position of the member they represent. 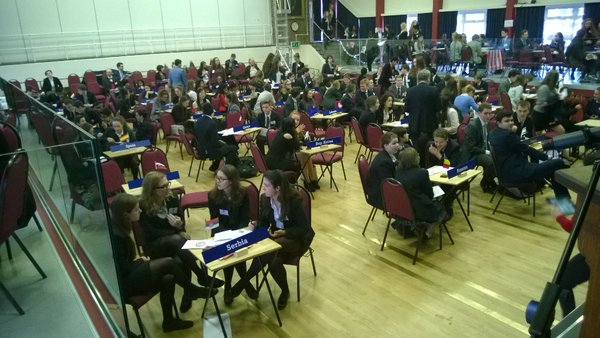 Croydon’s conference – or CROYMUN as it is known – welcomed delegates from a wide variety of schools, including sister schools Blackheath High, Bromley High and Streatham and Clapham High from the GDST family. Highly topical debate topics ranged from the question of mandatory quotas and the integration of refugees, to the financing of international terrorism and the air strikes and ground invasion of Iraq and Syria, as well as FGM and HIV. Ultimately the team from Latymer Upper was awarded Best Delegation. But, unlike many competitions, MUN really is one where participation is as rewarding as winning and all the teams went away feeling energised by the experience.

Feedback from the schools has been excellent with praise heaped on the professionalism of the organisers, who primarily were the sixth form team at Croydon High.

Steve Parsons from Blackheath High said: “That was a pretty slick event on Saturday, hard to believe it was Croydon’s first. We’ll certainly be attending next year.”

Will Burn, from Epsom College agreed, saying: “Thanks for organising such a great day. Our team came home absolutely buzzing about the MUN experience and itching to do more. They were inspired by the experience, and I was, too.”

Croydon High’s Head of Politics, Jonathan Vickery has been running MUN at Croydon High for 20 years and was understandably delighted with the first CROYMUN conference: “Full credit to the girls here for running such an impressive day. In true Croydon High style, they rose to the challenge and delivered over and above all our expectations. I am extremely proud of them and looking forward to next year’s event and to introducing more schools to the very real benefits MUN can deliver. It was truly inspirational to see so many well informed and passionate young people debating and discussing the real issues of the day.”

GDPR – Are you Ready?

Taverham Hall’s chapel choir are hitting all the...