For the last 2 years, pupils at Broomwood Hall School in South West London have been fundraising for ‘Broomwood in Ethiopia’ a project to build and run a school in Ethiopia.
The dream was realised in March last year and a month later a group of supporters from Broomwood Hall were able to visit Ethiopia and see the project up and running. 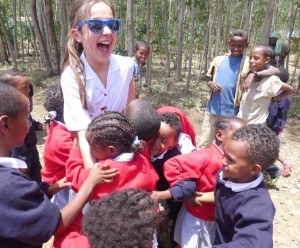 Katharine Colquhoun, Principal of Broomwood Hall School commented: “It was a fantastic opportunity for the children from both schools and they all leant a lot from each other. We hope that trips like this one become more frequent and that the links between the schools grow stronger as the children grow up together.”
The school was named for the patron saint of both Ethiopia and England to emphasise the link between the schools, it is especially relevant today, on the feast day of St George, when the children at both schools celebrate their patron saint.

Improving your Child’s Social Skills with Arts and...

Merchiston in a Nutshell