The team won the National County Show Jumping Championships in the 90cm category on a zero score competing against 27 other counties. Only one other team from the county of East Sussex ended on a zero score but they were over 10 seconds behind. 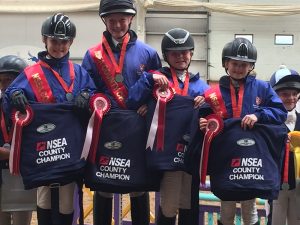 The team of Emma Philpot, aged 14, and Eloise Squibb, aged 11, both from the senior school, and 10–year-olds Tia Squibb and Ellie Burrell, from the preparatory school, rode exceptionally well with Ellie also triumphant individually on her pony. Eloise won a further accolade by being awarded the style prize from the 164 competitors in this class.

As a result of this win, the four riders will now represent England at the Home International Showjumping Championships in October at Addington Manor Equestrian Centre, Buckinghamshire.

Team Manager Annette Philpot said: “It was a fitting reward for the girls’ hard work and training prior to the event and repeated Brentwood’s brilliant win last year in the 80cm and 90cm categories!”