The designer of Bob the Builder and popular children’s author and illustrator, Curtis Jobling, revealed the secrets behind his most famous characters and urged pupils to nurture their hobbies when he visited The Elms Junior School this week.

Curtis, who also worked on Wallace and Gromit and Mars Attacks! before creating the iconic Bob in 1997, addressed every year group, from reception to year 6, at the Long Eaton school and took them on a journey through what had inspired him during his childhood, describing how those earliest influences had led to him doing what he loves doing today.

As well as bringing Bob to life for the older pupils, using circles and shapes, Curtis taught the younger ones how to draw another of his animations, CBeebies’ Raa Raa the Noisy Lion. He explained how the idea for that character was born after running out of farmyard animals whilst singing ‘Old Macdonald’ with his own children. 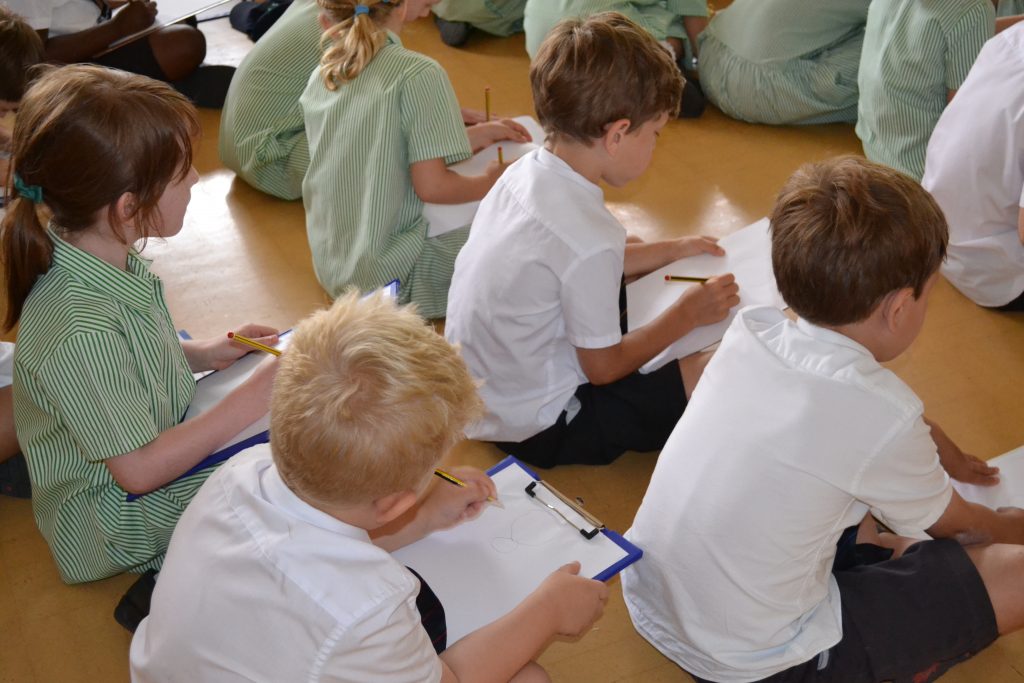 Having had eleven books published in six years, including his acclaimed series of epic fantasy novels, Wereworld, his darkly comic young adult thrillers, Haunt: Dead Scared and Haunt: Dead Wrong, and his teen-targeted Max Helsing vampire hunter series, he also told his young audience how reading is pure escapism and the more you read the better you are at writing.

Curtis will be back at The Elms as guest speaker at the school’s Speech Day on Wednesday 5 July, encouraging parents and children to use libraries like he used to love doing with his mum when he was a child. His first favourite book was Where The Wild Things Are before discovering The Hobbit and later Dungeons and Dragons as his fascination with fantasy, ghost stories, monsters, myths and folklore were bedded in for life.

It was that message he left The Elms pupils with on Tuesday.

Curtis said: “Nothing can stop you from doing what you want to do; if you want to be an author or illustrator or a sports star or musician you can. Keep doing your hobby, keep doing the things that you love doing and nurture it.”

Keith Morrow, Headmaster at The Elms, added: “The pupils were hanging on Curtis’ every word. When he used a flipchart and pen to draw Bob the Builder, to show the children how he was created, they loved it!

“Curtis was so engaging and related to the young audience brilliantly. His message about doing what they love was very powerful too. All youngsters are growing up in a world where being busy is the norm and sometimes it’s easy to forget to simply do things you enjoy for enjoyment’s sake. Curtis is someone who never forgot what he loved as a child and has made a brilliant career out of it. What a great role model to have.”

A new school year calls for a new...