The choir at Benenden School has collaborated with renowned violinist Jennifer Pike to release its first ever commercial CD.

Benenden Chapel Choir joins a select group of school choirs to have been professionally recorded for commercial release.

The girls perform an 80-minute long interpretation of Stabat Mater – a 13th century text which portrays Mary’s suffering following Christ’s crucifixion. The piece was composed by David Bednall, one of the leading choral composers of his generation.

Benenden Chapel Choir is made up of 34 girls aged 13 to 18 from Benenden School, one of the UK’s leading independent girls’ schools. Jennifer Pike, who shot to fame in 2002 when she was named the BBC Young Musician of the Year, performs the solo violin part on the CD.

The Choir will give their UK première performance of Stabat Mater at a concert at Holy Trinity Church, Sloane Square, London on Friday 17 June – a week ahead of the CD’s official launch. On Friday 24 June the CD, which is being released through Regent Records, goes on sale through Amazon and High Street music stores. 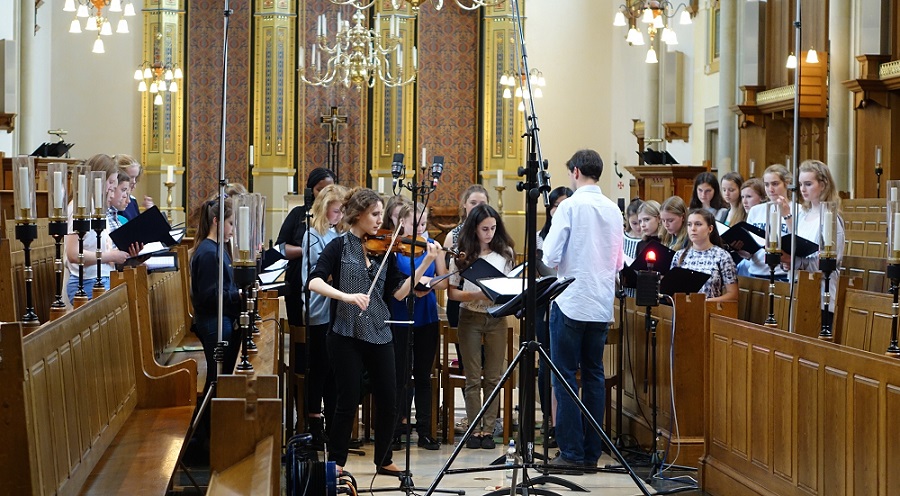 The launch marks the culmination of four years’ work for Benenden School’s Director of Music, Edward Whiting. He opened the Choir up to girls from lower down the School, where previously it had been restricted to Sixth Formers, and greatly increased the number of practice sessions they committed to.

Mr Whiting, who studied Music and held the organ scholarship at The Queen’s College, Oxford, said: “It’s something we hope we can cherish and be proud of for a long time but equally it needs to be seen as the start of something. Having established this Choir on this footing I hope it will lead on to more concerts, tours and recordings.

“I would like to think Benenden and Music at Benenden will reap the rewards for years to come.”

The girls premièred Stabat Mater in New York last spring and recorded it for the CD over three days at Tonbridge School, Kent shortly afterwards.

Mr Whiting said: “Performing Stabat Mater in prestigious venues in America and now London has taken the Choir into exciting new territory as we look to establish the choir on a professional footing.”

Jennifer Pike said: “David’s music is profound and beautifully written and it has been an enormous pleasure to work with him, Edward Whiting and the Benenden Chapel Choir on this Regent Records disc.

“David has combined the sounds of violin, organ and young voices in an exceptionally imaginative way and it has been inspiring for me to be part of this musical journey. I’m also delighted to be performing on the disc a number of pieces for violin and organ that he has composed especially for me.”

Benenden, which is home to 550 boarders, is in the process of creating a new Hall and Music School as part of its ambitious plans ahead of its centenary in 2023.

Samantha Price, Headmistress of Benenden School, said: “Performing and releasing this most ambitious of pieces is a wonderful achievement for our Music department, and particularly for the very talented girls whose professionalism and commitment have been a testament to Benenden.

“I believe this CD has set a new standard for what school choirs everywhere should aspire to, and I cannot wait to see where this exciting journey will take us next.”

Copies of Stabat Mater on CD can be ordered at www.benenden.kent.sch.uk/stabat

Eight Ways to Get Round an Exam Paper