Bedford Modern Junior School pupils won the final of the National Inter-School Quiz Championships on Tuesday 10 June held at Harrow School. The BMS team scored 2,260 points to be awarded first place with the school finishing in second place scoring 1,980 points. More than 1,200 schools competed nationally in the high-tech quiz, making it the largest inter-school competition in the country.
Having successfully got through the regional heat and semi-finals held at Bedford School, by beating ten other teams, Bedford Modern Junior School pupils, Lewis Oxtoby (Year 3), George Western (Year 4), Meelan Jakku (Year 5) and Michael Chamberlain (Year 6) went on to win the national final by answering 36 out of 40 questions correctly.
Mr Capuano, Director of Studies at Bedford Modern Junior School said: “The BMS team performed exceptionally well, portraying a real sense of cohesion and strategy throughout.
“The breadth of knowledge these children possess is mind-blowing; only failing on four out of 40 questions. It was a fiercely competitive competition with a number of prestigious schools, such as Dulwich College, Manchester Grammar and The Hall, to name a few, all competing for this illustrious prize, held at such an exquisite venue that is steeped in academic history.
“We are all so very proud of the Bedford Modern Junior School team and happy that all their hard work has resulted in such a fabulous victory.”
Nine-year old George Western added: “The final was very tense and even some of the parents didn’t know the answers to all the questions!” 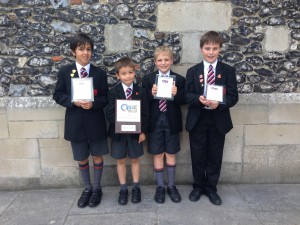 Improving your Child’s Social Skills with Arts and...