2017 will herald the completion of a series of multi-million pound major investment projects across ACS Internationals Schools’ three UK campuses in Surrey and Greater London.

Fergus Rose, Advancement Director at ACS International Schools, commented: “This is a very exciting time for ACS pupils and staff as this continued investment phase across all our UK campuses nears completion. The investment reflects our commitment to providing a full and future-focused education with cutting-edge facilities for teaching and learning. Anyone interested in a world class international education for their child is invited to experience our world class facilities at our forthcoming open days in February and March.” 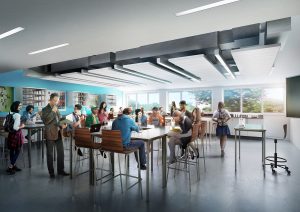 ACS Hillingdon – a cutting-edge £10 million science centre, due for completion this May, incorporating seven student science and technology laboratories and a designated micro-biology unit. This latest investment is designed to enhance student and teacher collaboration in science learning, and encourage students to explore the realms of scientific research.

ACS Cobham – a new four-floor boarding accommodation will open in this September. The new boarding house will provide an additional 113 students, aged 12 to 18, with a ‘home away from home’ including single en-suite bedrooms for all final year students. The £15 million project will also allow the school to increase its seven and five day boarding options, alongside its flexi-boarding offer. A muti-million pound refurbishment of the existing boarding facilities is also due to start later in the year.

ACS Cobham is also home to a multi-million pound performing arts centre which was completed in 2015. The 509-seat auditorium is one of the only schools in the UK to have a professional fly tower.

Back to School Uniform